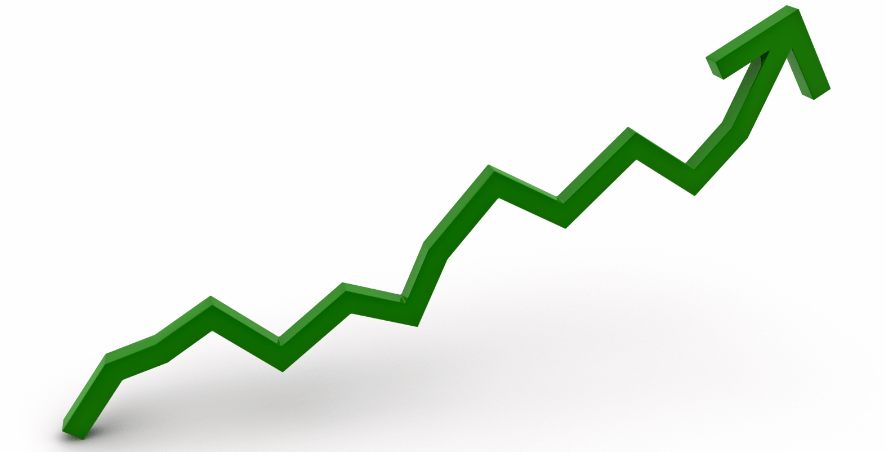 This from Peter Thompson

Auckland house prices continued to rise in August, but signs the rate of increase is slowing – which first showed up in July – were still present. “August’s price increase was restrained, for both the average price and the median price,” said Peter Thompson, Managing Director of Barfoot & Thompson. “The slow-down is not so obvious when comparing August data with that for July, but when you look at the average for the previous 3 months it becomes more apparent. “The average sales price in August was $906,560. While this was up 4.5 percent on that for July, it was up only 2.6 percent on the average price over the previous 3 months.

I am seeing reduced numbers at open homes but prices have remained quite robust. 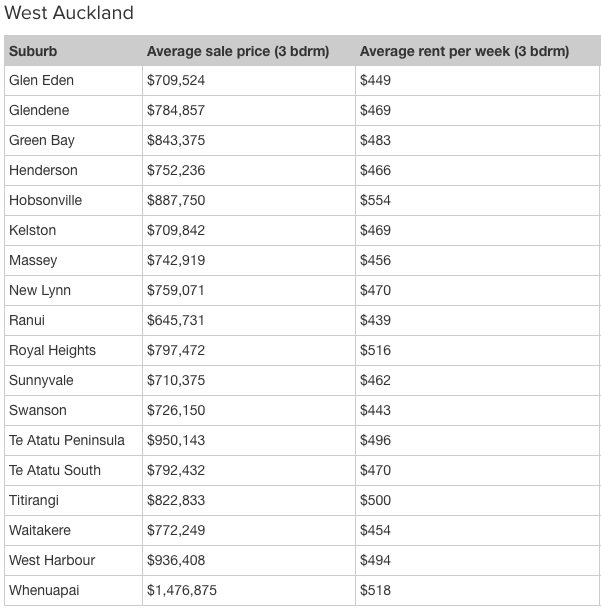 Note: The Te Atatu Peninsula average 3 bedroom house is up 3.19% from last month, while rent has stayed the same.

Who has been selling what in our area in July! 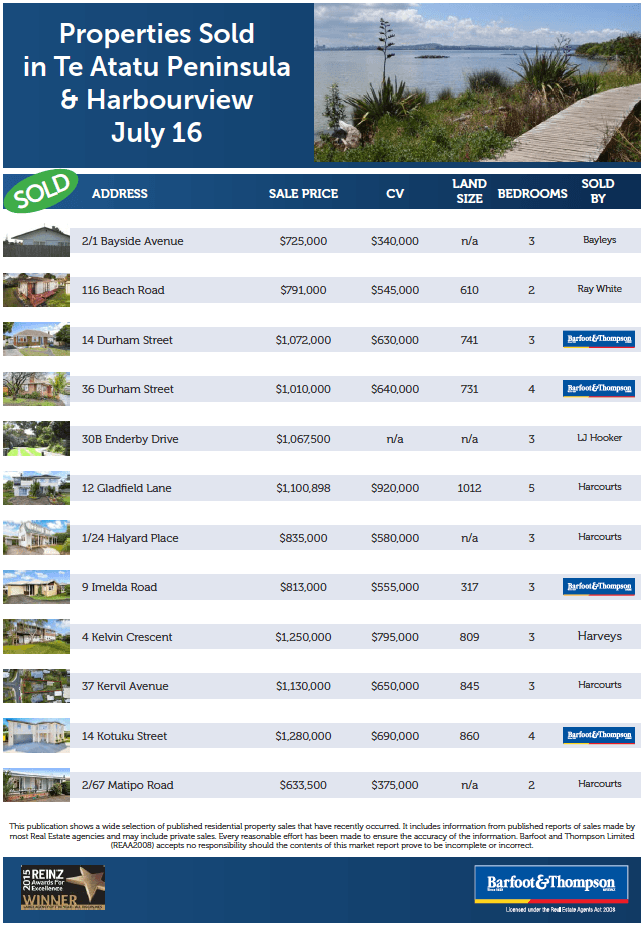 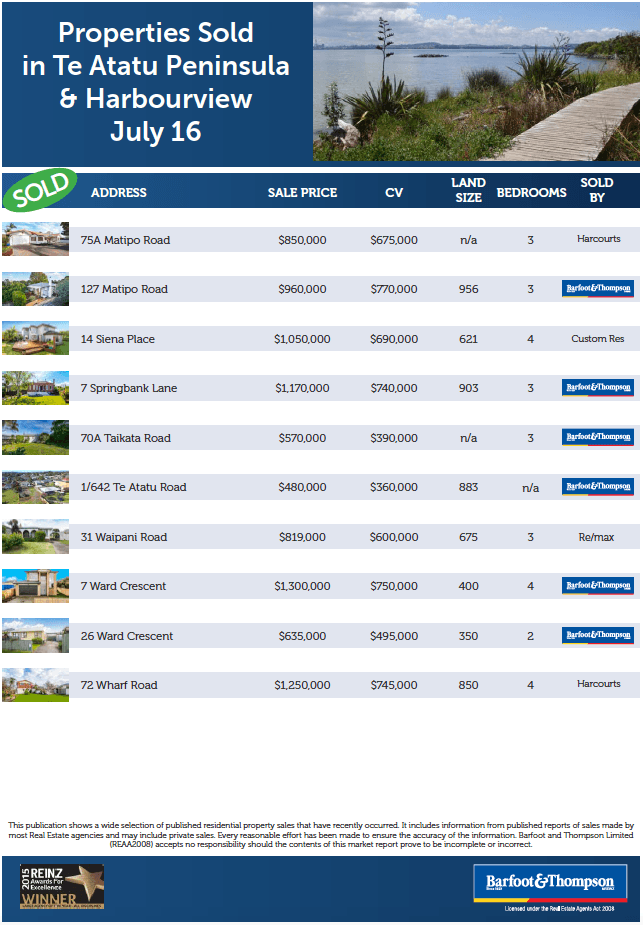 Tell me how I can help you.

MIchelle Kelly
06:36 21 Feb 20
Mark and Lisa were helpful and friendly. They know Te Atatu Peninsula well and were always quick with communication, open and honest. Thank you!

Rebecca Grindle
01:20 12 Feb 20
Mark and Lisa sold our home with support, respect and care. They were there through auctions, multi offers and the final calls. They handled the process with professionalism, laughter and support. Thank you Mark and Lisa for your endless work and kind nature towards me and my boys throughout the process. Recommend you guys over and over again.

Ian Williams
03:19 01 Oct 19
Mark and Lisa helped us navigate our way through what became a lengthy process with tact, wit and professionalism. Their attention to the detail and challenge of the process allowed us to always be on the same page as them. Ultimately their task of convincing us to ‘meet the market’ was helped in no small measure by their confidence and sensitivity. We concluded the transactions with trust still intact and that surely is a “Win-Win”. God Bless guys!

Zoe Baker
08:52 28 Aug 19
Mark and Lisa were great to work with: honest, straight-talking, communicative and motivated to help, and they made the whole process really easy! I really appreciated their expert advice, knowledge of the area, wisdom and guidance. Would definitely recommend Mark and Lisa to anyone.

Kerry Rowlands
01:27 24 Jun 19
Lisa and Mark were a pleasure to work with regarding the recent sale of our property in Te Atatu Peninsula. Both presented as experienced, professional and genuine Real Estate Agents and made the process very streamlined and pain free. We found them extremely responsive, easy to deal with and that their service represented good value for money. As a result we would have no hesitation in recommending them to anyone else considering listing their property or to engage again should the opportunity arise.

Emma Ball
00:44 24 Apr 19
Lisa and Mark were fantastic in helping us purchase our first home. They were always happy to help with any queries and always made themselves available when we needed to access the property prior to the sale going through. Lisa and Mark are very friendly people and were even helpful in choosing our wall paint colour :-) Thank you both.

Claire Hackett
10:03 15 Feb 19
We recently sold our home through Mark and Lisa at Barfoot & Thompson Te Atatu. How do I even begin to describe how lovely and genuine they are! Very professional yet very friendly. Would 100% recommend them to anyone wanting to sell their home. They made us feel comfortable and at ease every step of the way. Great communication skills, always easy to get in contact with and they just work absolutely amazing as a team! Thank you both very much for everything :-)

Jason Vandenberg
00:22 12 Feb 19
We recently sold a property through Mark and Lisa. We had a relationship with a bunch of local agents, but they got the nod as we believed they were right for our property. We enjoyed that they were genuine, honest and trustworthy. One thing that set them apart from the rest was their commitment. They never missed an open home even though the listing was over the Xmas / NY period. Other agents suspended their weekly open homes, or moved to 'by appointment only', but Mark and Lisa kept these going throughout this time. We appreciated the effort they put in.

Jesse Crooks
10:15 11 Feb 19
We chose Mark and Lisa to market the sale of our home in Te Atatu Peninsula. From the outset we found them both to be very professional, organised and great communicators. They made the often daunting experience of selling a home more relaxing. We would have no hesitation engaging Mark and Lisa to sell property for us in the future.

E Smith
08:23 11 Feb 19
We recently bought a place through Mark and Lisa and found them to be great to work with. As first home buyers we needed a bit of guidance and they were always available to help, and answered our questions along the buying process. A super team! We recommend!

Ellen Williams
22:57 10 Feb 19
We recently bought our new home through Mark and Lisa at Barfoot & Thompson Te Atatu. We had an excellent experience from beginning to end. They were both professional, genuine and great to deal with - we never once felt pressured or hurried and we're delighted with our new home.

Daniel Smith
00:59 05 Jul 18
Mark is a friendly and professional real estate agent. We found the entire process of selling through him to be stress free and straight forward which is a credit to his time in the industry. He provided us with plenty of expert insight into the local market and you could tell that he had done his research. He met with us numerous times and was always accommodating of our work schedules, often driving out to see us. He ultimately removed the worry and uncertainty we had with selling our house. Everything was explained to us clearly right from the start and there were constant updates over the open home period to let us know how things were progressing. He followed up on all potential buyers to keep interest high and also ensured they were finding the right house that suited them as well. We ended up with a great result and we're just really happy we were able to get Mark on board to help us sell our house. All round a top bloke.

h cameron
07:31 20 Jun 18
"As overseas vendors we knew that honest communication and top notch service from Lisa and Mark would be important. From our first conference call, we knew that Lisa and Mark were on the same page. We weren’t desperate to sell, and Lisa was open about the vagaries of the current Auckland market. Lisa kept us updated, often daily, as the open homes were often rained out by horrific storms. When the fence blew down just before auction, Lisa had a fencer out and a quote to us by the next business day. Mark could put us in touch with the professionals required for various reports needed by potential purchasers. Due to subsequent feedback from viewers, we decided to give the place a facelift. Mark was ‘on call’ for 4 hours’ with the power company who required someone to meet them onsite, with 15 minutes notice, during that timeframe! Lisa and Mark also regularly met and provided access to the tradesmen. Not once did they just leave the place unlocked. Before one open home, Lisa and Mark filled 3 vacuum cleaner bags, vacuuming the mess left from the carpet layers! Due to a change in personal circumstances, we decided not to sell, and to move an elderly relative into the house. Lisa and Mark were incredibly understanding, and still met with the bathroom renovator and roofer so that we could finish the place before she moved in. For them to help us out like that - knowing full well that they wouldn’t be completing the sale – well that is what I call platinum service!” Hudson & Vanessa

Camille Khouri
21:25 22 Feb 18
We worked with Mark and Lisa to sell our house in Te Atatu South. They were very friendly and down-to-earth, which we appreciated - when you are going to be having someone coming to your home many times over the coming weeks for open homes, etc, it pays to enjoy being in their company! They also did a fantastic job of selling the house, finding us a buyer within three weeks and in a difficult time for real estate, just heading into Christmas. I would thoroughly recommend them to anyone looking to buy or sell.

Terry Zhang
10:10 22 Feb 18
We just moved to our first home with great support from Mark and Lisa. They are very friendly, caring and can think from our view. Will recommend to my friends who want to sell or get a property.

Courtney Seward
20:34 06 Nov 17
We worked with Mark and Lisa to sell our house on Matipo Road on the Peninsula. We met with one other agent but settled on Mark and Lisa as we felt like they really wanted our business and we weren't just another number. We found them both to be very professional and motivated throughout the campaign. They worked hard to get as many genuine purchasers to our auction and we managed to get a fantastic price for our property come auction day. We wouldn't hesitate in using them in the future or recommending them to anyone looking for a real estate agent. Thanks!

Rhys Parker
05:15 25 Sep 17
We recently sold our house and bought a new one with Marks help. He has a very relaxed style which we found working really well both on the seller and buyer side. If you are planning on selling your house I recommend you give Mark a call.

Andrea Calvin
20:29 24 Aug 16
Mark is a man of integrity who is kind and funny. I have known him for over 20 years and always found him to be completely trustworthy.

Jenny Jeffries
20:08 24 Aug 16
I have known Mark Boyd for nearly 20 years. He has always been an honest, caring neighbor, motivated and enthusiastic worker (we've worked on various projects in the past), and he has that rare ability to brighten other's spirits. It's rare to get all of that in one person.

Joe Streat
23:26 06 Aug 16
I have known Mark and his whanau for decades. He is a dyed in the wool Westie, straight as a gun barrel, with enormous energy,integrity and humour. Awesome bloke from an awesome family.

Megan Ede
03:13 25 Jul 16
I've known Mark for 35 years personally, and more recently in a professional capacity. I've always known him to be confident, honest and friendly - all traits that will serve him and his clients well. His professional manner and enthusiasm for what he does builds a confidence in you that he not only knows what he's talking about, but will take care of you and your interests. Mark has a great sense of community and is in touch with what's going on in the area, making efforts to network and be engaged with what's happening. I have no hesitation in recommending Mark as someone who will take a genuine interest in you as a client should you be seeking professional help with your real estate options.

Scott Henderson
03:15 22 Jul 16
Mark is really honest and hardworking and would strive to achieve the best results for his clients. He also knows where all the good coffee places are!
Next Reviews Write a review